Impreza Host products and services are operating with no disruptions. Our team is staying in Ukraine, united, and has channelled some of its efforts towards supporting the Ukrainian army and people.️ We do believe in our country and our people!

We have never been so united as we are now! Yet, we have never believed in victory as much as we do today! We are going through a period of formation of the Ukrainian people as a nation and we are proud of our country. Notably, Ukraine is more than 28 times smaller than Russia, but for 35 days their forces could not capture any of our great cities.

We would like to thank our peers and partners who work tirelessly to ensure the stability and security of our services, as well as our global customers, for their support and continued trust.️ Every little helps, every word matters!

What is Actually Happening in Ukraine?

Russia is a well-known empire of lies. Hence, we aim to provide you with bare facts. Russian forces have bombarded and set on fire a nuclear power plant in Zaporizhzhia, the sixth largest one in the world.️ They have also captured the one in Chernobyl and de-electrified it, exposing at nuclear disaster risk all of Europe.

Unable to seize our cities or subjugate the people, Russia has resorted to blackmail and terrorism, in the dirtiest and lowest ways… Zaporizhzhya NPP, abduction and torture of mayors of unconquered cities and civil activists.

Russian air forces and artillery are shelling Ukrainian cities, attacking civilian neighborhoods and buildings with rockets, using methods of ecological and human terrorism. They have already fired about a thousand rockets at Ukraine.

The United Nations Refugee Agency, UNHCR, reports Russia’s invasion of Ukraine has forced over 3 million people to flee the country as of March 28, while thousands of others have been displaced within its borders, killed, or injured.️ 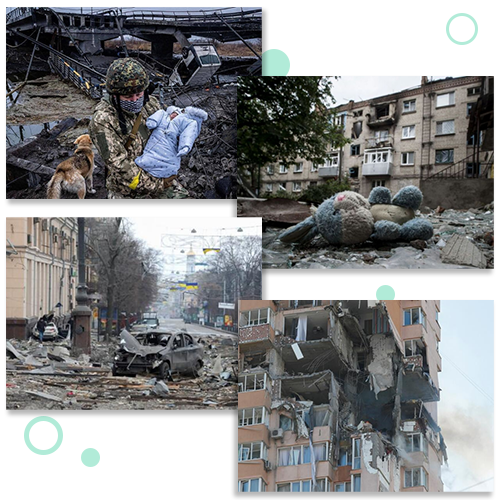 How is Ukraine Preserving Amidst Russian Aggression️?

The Russian invaders are irreparably damaging Ukrainian historical and cultural heritage. They’ve got no cultural values or sympathy.

Due to absolute failure at the battlefield, they aim at schools, maternity hospitals, blocks of flats, factories, private houses – anything they can reach from a distance, often using illegal and inhumane weapons. Yet, thanks to our stronghold air defense, most of their efforts are useless.

The Ukrainian army and civilians are successfully resisting attacks by the Russian invasion troops, showing extraordinary skill and courage. We’re staying strong and united in defending the sovereignty and territorial integrity of Ukraine.️ Yet, it is crucial to understand that Ukraine is an ultimate fort post for all of Europe, shielding it from Russian barbarians as they do not deserve any other names.

How Can You Help or Support Ukrainians?

Thank you all for your kind words of support and donations to help Ukraine fight off the Russian invasion!️ Every little is highly appreciated and counted!

Undoubtedly, as the war in Ukraine unfolds, the scope of humanitarian needs is growing at an alarming pace.️

To help address these needs, we are now accepting donations. Through the Foundation, we will be able to source and distribute food, medical supplies, hygiene products, etc., to the Ukrainian people. You can help with this initiative by donating.️ Any sum or currency is welcome.

You can financially support the Armed Forces of Ukraine.

If you have a credit card, please use the official site:

Or you can use IBAN

Alternatively you can use our crypto wallets. After getting a payment, we will donate the entire sum for the needs of our defenders. We will also send you the confirmation via screen that it was successfully completed with thanks!

Ministry of Foreign Affairs of Ukraine has launched an information platform for foreign audiences concerning the war in Ukraine war.ukraine.ua. The platform’s main goal is to provide verified information about the situation in Ukraine, share ways to support Ukraine, and show the human dimension of the resistance.️

Follow and use this hashtag on your social media to indicate your support and drive the world’s attention to the cause.️
Impreza products and services are no longer available for Russian users. We doubt they will be ever available to them.

Impreza in the Times of War

Since the war has begun, we’ve been scattered across the world, with some of us fighting in the Ukrainian Army, Territorial Defence, Ukrainian IT Army, volunteering to provide food and medicine, or crossing the border to reach safe spaces.️

We also actively spread the word about the situation in Ukraine and share information about ways to help Ukrainians in the war started by Russian Federation against Ukraine.️

Our team members are supporting and helping each other 24/7, coordinating if anyone in the team needs help leaving dangerous locations and getting to safer places, providing psychological support, and exchanging helpful information.️

We are the team; we are standing strong shoulder to shoulder, defending our families, our land, our country! Long Live Ukraine!

What Impreza team are Working On

Our team ensures there are no disruptions in the support. Our products and services will continue to work flawlessly. Our support team will keep responding to all your messages, despite these turbulent times!

Our engineers are scattered around the country, staying with their families and supporting or swapping with each other, in times of airstrikes. We do our best to keep working and become even better after our victory.